Readin’ this Chia pet‘s books is like talkin’ to a bum on the street who claims to be multi-drunkic, that when he drinks, he doesn’t just get high once, but multiple times. He says the trick to this is to hold in the vomit, and then recycle the Qi (that’s Chinese for drunk power) up to his head, where he can continuously get more and more drunk highs without limit. All he needed to do was to practice holding in the vomit, which takes several thousand tries first before you get it right. Ooops! Guess I’ll have to get drunk a lot, he says.

Chia is going around selling MIPS manuals, gettin’ rich on turnin’ everyone into a whore, corrupting spiritual folks into prurient fiends and destroying the health and well-being of every unfortunate man he touches with his stupid theories. He greatly pleases his Jewish masters. He is unknown in China and Daoist circles – though Western yankees love his multi-deathspasmic ideology. Chia’s program is dressed up as ancient Chinese wisdom. Chia poses as a Chinese named 謝明德, though he is Thai.

Observe the questions and answers, you’ll see that Chia’s teachings are profound – they aren’t just about sex. But to master the teachings, you have to have a lot of sex. Dressed up in the beautiful idea of avoiding seminal emissions, Chia’s program requires hundreds if not thousands of acts of fornication as “practice.” Like Osho’s protocol, the pathway to not sinning is extreme sin and self-destruction.

Poisonographer Jimmy Wales’ Wikipedia✡, has a page named Taoist Sexual Practices, which state in short, “Some Daoists maintain the Dharma of celibacy, while others think you can cheat it.” The article then immediately goes on to quote Joseph Needham and Mantak Chia, and the references at the bottom are almost all from Chia. Neither Needham nor Chia are Chinese, much less Daoists. To the right there’s a blasphemous pornographic painting of two random Chinese people fornicating. (A “Daoist sexual practice” picture should be blank.)

Yet also on the right there’s a Daoism panel reveals the founders of Daoism (yes, the character 道 is read dao4, not “tao”) are: Laozi · Zhuangzi · Zhang Daoling · Zhang Jue…who were all celibates. Laozi is the true founder of Daoism, and he was a celibate leader of a cult of wandering meditators. His death was never documented because he went off into the mountains on a water buffalo.

Chia’s fallacies can be summed up as follows:

The wikipedia is almost entirely about the creepy and blasphemous nonsense driveled out by Chia, yet there is no picture of him. Here you’ll see why: he is ugly as sin. His eyes are tiny and dull, his skin darkened from toxic buildup, and his teeth are black (he appears to be a heavy smoker). The shape of his face is like that of a child suffering from mongoloid retardation. I’m sorry the reader has to see such a horrible excuse for a human being, but here he is: 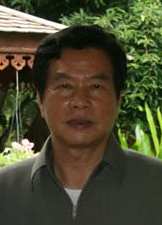 An insane blasphemer of the Daoist religion, Mantak Chia

Notice the difference in teeth

And finally, this question does not even need to be mentioned for most readers: Who is promoting this scumbag? Why of course, kosher and highly-credentialed windbags like Dr. Alex Benzer, another misandrist Jew and promoter of little Chia. When he’s not busy writing evil books for your short-term pleasure, Benzer is out humping your sister, wife or daughter with his circumstump to practice his amazing religious knowledge.